On Sunday, March 6, 2016, I had the wonderful opportunity to attend the International Women’s Day celebration hosted by the Iranian Circle of the Women’s Intercultural Network (ICWIN). When I first walked in to The Grand Long Beach Event Center, there was an all-woman mariachi band, Grupo Bella, serenading the 200+ crowd of guests talking and observing the many paintings by local women and Iranian artists*.

There were also performances by ADAAWE and Mamak Khadem. For snippets of their performances, please go to our Instagram. The programming speakers ICWIN put together engaged the audience in several issues related to gender equity. 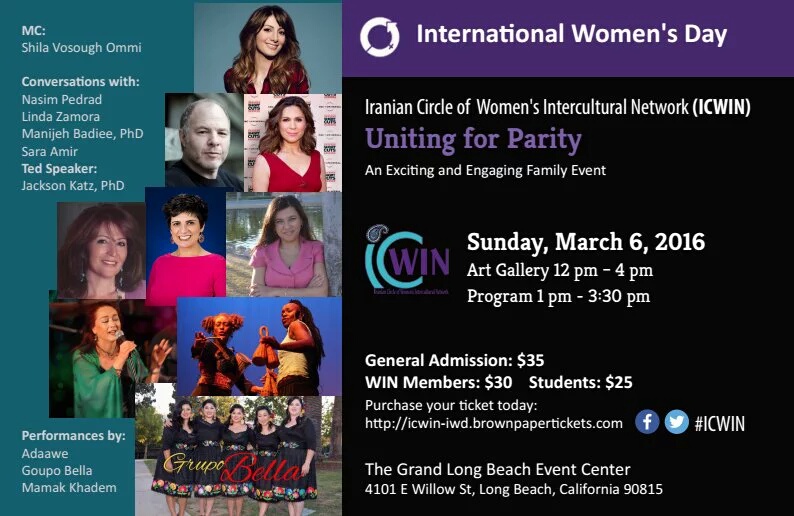 Nasim Pedrad , an Iranian American woman best known for her work on SNL, said she was born a comedian. She said, “I used comedy to navigate my adolescence as… someone who was not white but with a lot of white friends.” Pedrad had discovered the power of comedy during her childhood, when she noticed the tremendous joy her comedic Aunt would create in family gatherings just by saying the right words at the right time. She said that her success is in part because of her diligence to write and create her own work. Pedrad also attributed her success to the surging expectation that people of color should be genuinely included in television media. She advised young women of color interested in media to fiercely produce creative work and be open to opportunities.

Jackson Katz (Ph.D.), perhaps most famous for his TED talk “Violence and Silence” (also below), spoke about the legacy of women’s leadership to change culturally acceptable violence against women and children. Katz expressed gratitude for women’s leadership and mobilization. The quality childhood that we enjoy now, he said, is in part because of the fight for children’s rights lead by women. Women rights activists have fought for us to mutually recognize and respect each other’s equal humanity. Their successes have improved the quality of life for everyone. Men should thank women who are continuing that fight. He then made a call for all men to be a little bit braver and to challenge even the most casual sexist and racist comments. The bystander effect is a passive tacit agreement with discriminatory action or violence. It is dangerous. Men should stand up to sexist statements that might excuse abusive or violent actions against women.

Manijeh Badiee, assistant professor of psychology at California State University, San Bernardino, moderated a discussion on women in politics with Sara Amir, the 1998 Green Party candidate for Lieutenant Governor of California, and Linda Zamora, the 2016 Prospective Candidate for Garden Grove Council Member. Their discussion centered on the fact that most women do not think they are qualified or worthy of running for elected political office. Amir and Zamora were adamant that the only way to get experience is to get started at some level of government. They said that more elected women leaders are needed because too many policy decisions, especially about women’s health, continue to be made for women –not by women. Women of all different backgrounds would infuse America’s government with richer understanding of public policy issues. Both Amir and Zamora were frank about how uncomfortable they were asking for money and campaigning, but they also recognized that their attitudes were part of a greater gendered instruction for women to doubt themselves. Zamora said that part of what keeps her pushing forward is the idea that just by being visible, she is making it easier for future women to run for political office.

All of these speakers hinted that fighting for themselves or women in general is occasionally awkward and socially isolating. They expressed gratitude for women who had made their quality of life better and lead the way for their struggle. The resounding message of the event was that women need to keep going so the fight isn’t so hard for the next generation. This was expressed to a crowd of men, women, and children; artists, business men, and political activists. People of different genders and professional and cultural backgrounds attended ICWIN’s event. Among the diversity of the crowd was an important unifying element: enthusiasm.

The speakers were powerful but the crowd of enthusiastic attendees mattered even more. Advocating for social justice and gender parity is choosing to challenge a status quo, an often unrewarding process. Coming together with fellow advocates and supporters in a physical space is an emotionally replenishing act. This International Women’s Day and throughout the month of March, I encourage you to reach out to a woman’s organization and find an event or conference you can physically attend. Have conversations, and enjoy the process of coming together for a common cause.

Sign up to keep updated on Women’s Voices Now